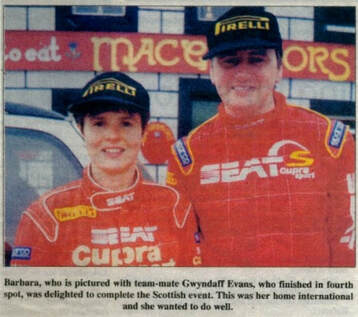 Castle Douglas driver Barbara Armstrong took the top local honours in the RSAC Scottish Rally which roared through the region on Friday and Saturday.

​The SEAT works driver finished 14th overall in a strong field and now leads the British Ladies Championship. Her team-mates Toni Gardemeister and Gwyndaf Evans both finished inside the top four to strengthen SEAT's Mobil 1 British Rally Championship but the two-day event based at Dumfries was dominated by the Renault Meganes with the Finnish duo of Tapio Laukkanen and Kaj Lindstrom winning easily from Martin Rowe and Derek Ringer, the defending Champion.

But there were good performances also from other locals in privately entered cars, with Alan McMorran and Albert Connelly finishing a very creditable 21st in their Peugeot 205 at their first attempt at the International two-day event.
Barbara, who re-took the lead in the Pirelli Ladies Cup after a good performance through the forest stages of Dumfires and Galloway in her SEAT Ibiza, failed to let a series or problems wear her down. Starting from 10th on the road, she lost more time than most in the dust on leg one through Dalbeattie on Friday morning. She also overcame power steering problems early in leg 2 to challenge for a top 10 position. On the second day problems struck again for the Castle Douglas driver and co-driver John Richardson of Northallerton, with the power steering belt falling off part of the way through Glengapp, which was SS7. It was refitted at the end of the stage but came off again before the start of the Black Loch stage and she spent the rest of that stage with the co-driver changing gears so she could hold onto the steering wheel.
Barbara said; "This was my home international and I wanted to do well. The car was running great and although I lost time, I was happy to finish."
Powered by