​The Lady is a Champ 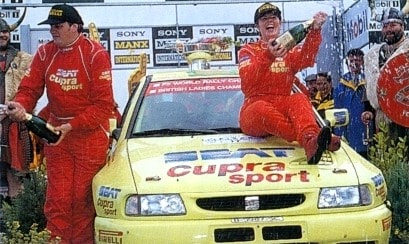 It's official: in only her second full year in the British Rally Championships, SEAT's Barbara Armstrong has won the ladies' title. But it took a heroic, determined effort on the final event, the Manx International Rally, to clinch it.  Only one week before the Manx, the Ibiza Cupra Sport driver dislocated her right shoulder after a fall from a bike in training. That was her second hospital visit in a week: she'd already injured her right hand in a jetski accident the previous weekend.  Despite physio treatment at every service halt, Barbara was forced to drive some stages using only her left hand, with co-driver John Richardson operating the handbrake. Even so, Barbara was still quick enough to beat her main rival Stephanie Simmonite to the title.
​
"Driving with such a bad shoulder injury was one of the most difficult things I've ever done." said Barbara. "I'm delighted to have won the title. It was a terrific team effort - and my Ibiza hasn't missed a beat all season."
Powered by