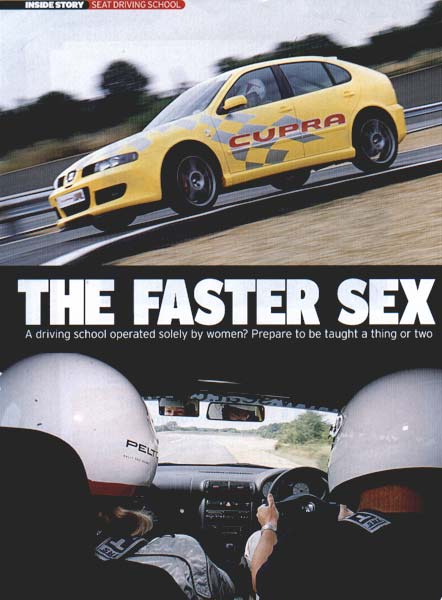 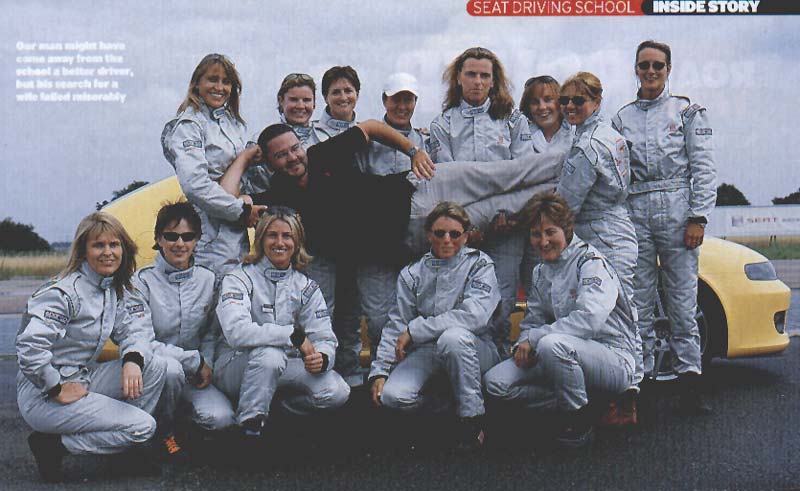 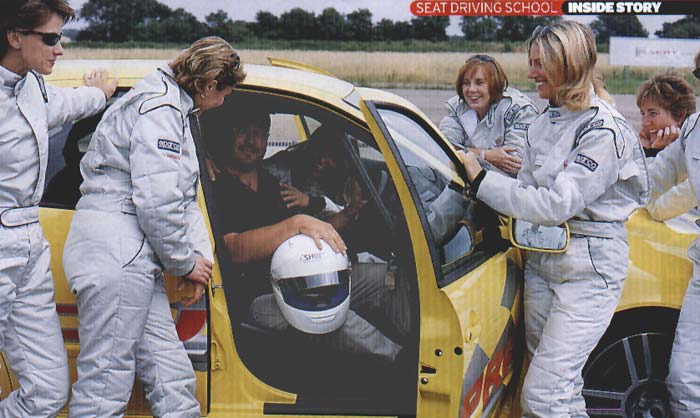 There are three core activities in which man must consistently outperform woman in order to feel like a proper bloke.  The first is cooking meat outdoors over an open flame, the second is football and the third is driving.  And of these, our opinion of our driving tends to be the most over-inflated.  Cooking a barbeque or playing football invariably involves other people; it’s hard to remain convinced you’re Jamie Oliver or Pele as your guests crunch through the burgers you’ve just torched, or when you’re beaten for pace down the wing by the 20-stone lad from the Dog & Duck.

But driving is often a solitary activity; as you sit there alone and marvel at your own ability it’s easy to convince yourself that no-one could possibly drive better.  Taking criticism of your driving from a bloke is difficult enough, but SEAT has taken the bold step of offering its mainly male customer a day of being both criticized and comprehensively out-driven by a team of female instructors.  Bit too bold, perhaps.  I foresee a lot of emasculated buyers making appointments with their local TVR dealer.

Not me.  I’m entirely happy about being an entirely average driver and am happy to take advice from handy pedallers of either gender, so I’m possibly not the ideal guinea pig. My motivations for attending are rather different. Stockings and suspenders might do it for some blokes, but for me it’s girls in Sparco and Nomex. And as the Hills, Schumachers and Villeneuves prove, driving ability is plainly genetically influenced. You can’t yet do much about your own genetic make-up, but imagine how much better your chances of fathering the next world champion would be if your partner could hold a 100-yard powerslide.

I’m hoping to come back with a few driving tips, and maybe a wife. But first I’ll have to get past Barbara Armstrong. Twice British ladies rally champion, Barbara is the chief instructor at the Seat Race School, based at Prodrive’s test track near Kenilworth, and runs it with a mixture of ruthless efficiency and maternal regard for her 20-strong band of lady race and rally drivers. Seat’s guests spend the day learning techniques that will make them smoother, quicker and safer. Sadly you can’t buy your way onto it – you have to be invited. Most attendees will be fleet buyers, repeat Seat customers or will have bought the new Leon Cupra R. It’s quite an incentive.

My first activity is the wet handling area with Barbara in the passenger seat. Using a Toledo with a switch to disable the anti-lock, we barrel in at 40mph, aiming the right wheels at a strip of low- friction asphalt and the lefts at a strip of tiles with no grip whatsoever. The difference throws the car into a violent, clock- wise flat spin. Immediately I learn something: when you have a spin like this on black ice you keep the wheels pointing straight ahead and don’t attempt to correct. This way the car will travel in a straight line, keeping you in your lane on the motorway. Add any lock and the car will both spin and turn, making a bad situation considerably worse.

Next it’s a slalom course on a wet, low- grip surface in a Cupra R with the standard stability control disengaged and rally driver Frankie Duncan next to me. It’s rare to feel these systems working in nor- mal road driving; it’s not until you can test them in a safe environment that you realise how good they are. Hurtle through the cones with the system on and you can feel the wheels being braked as they lose grip; you are slowed but the car stays on line. Try it with the system off and you get either terminal understeer or lairy over- steer if you lift OK I managed to get the back end out – and hold it – a couple of times in a vain attempt to impress Frankie, before having a colossal spin and decimating one of Barbara’s cones.

So what’s it like teaching men when they think they know best? ”I’ve had it all,” says Amanda Whitaker, who races single seaters and sports cars and has lined up on a grid with Montoya and Darren Manning.  ”I’ve had blokes actually pat me on the knee and say, Vs okay, dear, I know what I’m doing.’ But some guys prefer to have a woman instructor – they think it’s more of a challenge to their machismo to have a man pointing out their errors. And we can tell if you’re any good by the time you’ve changed from first to second.”

”And we can tell the ones who are going to be trouble,” adds Barbara, eyeing my shiny new Shoei lid. ”They’re the ones who turn up with their own helmets wearing racing boots.” After a few laps of the high-speed handling circuit with Amanda, whose instruction on lines and braking is the clearest I’ve ever had, it’s time for the rally circuit with Andrea Hall. She’s a former national Formula 2 rally champ, three- time national ladies rally champion and lead singer in a band called Massive.

We’re in a Cupra R with a full roll cage and four-point harnesses. I’ve done these things up a few times, but when Barbara insists on strapping me in, I don’t object. I thought I was doing okay, I really did. I was giving the Leon the lot wherever I could, braking in a straight line towards the turn-in point, heel-and-toeing fairly cleanly then back on the gas for a neat apex and exit. Then we swapped seats and Andrea did that really irritating thing that only properly talented drivers can, and just drove through every bend 10mph faster than I did. If you’re the sort of bloke with a jaundiced view of women drivers, you’d be well advised to listen to this lot. I emerged with ego intact, a few new skills and a cone signed by all the instructors. Sadly, none had added her phone number.
Powered by