Rhys Millen captured his first ProRally win at the Wild West International Rally, taking his Mitsubishi Lancer Evo 7 to a win over the Hyundai of Paul Choiniere. Tim O'Neil was third overall and first in Group N in a Subaru WRX.  David Higgins wrapped up the 2002 SCCA ProRally Drivers' Championship in his AV Sport Subaru WRX when Mark Lovell failed to score sufficient points in his Subaru to block Higgins. It was Higgins' second title of the year, as he recently captured the Group N title in the British Rally Championship, also in a Subaru.  "We had a little problem with the engine," said Higgins. "It dropped to three cylinders but we were still able to set good times and stay in the lead, so it would have been a lovely way to win the title with another victory.  The credit really has to go to the team of privateers at AV Sport. They had not been involved in U.S. rallying before this season and they've done a fantastic job. It feels great and I can get a good night's sleep without having to worry about it anymore."

Barbara on camera with Lovell's SubaruHiggins took the SCCA title despite not finishing the rally. His car suffered a rare drivetrain failure on Stage 11 after taking the lead from Millen. Another front runner who dropped out on Stage 11 was Carl Jardevall, who was running fifth when an electrical problem sidelined his Mitsubishi Evo IV.  "I finally started going faster," said Group N winner O'Neil. "I was being much more aggressive on the last two stages, so it's taken me all year to where I'm happy with my performance."

The Group N win puts O'Neil closer to Ralph Kosmides for the championship. Kosmides, who finished third in Group N behind Shane Mitchell, leads the points chase, 37 to 30 over O'Neil. The Group N Champ is the only one left to be determined at Lake Superior ProRally in Houghton, Michigan, in October. 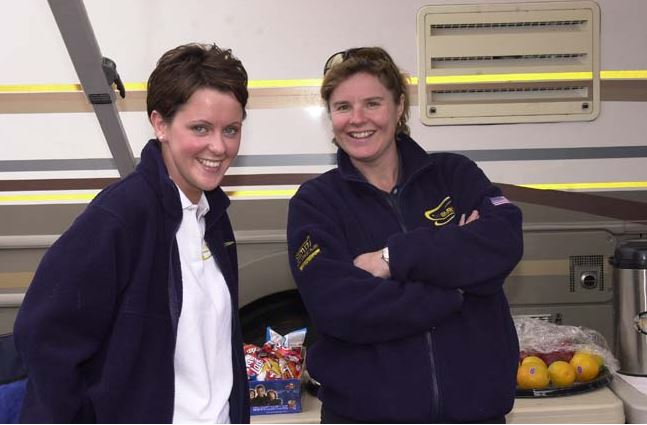 Barbara with Aisling Bentley
Powered by