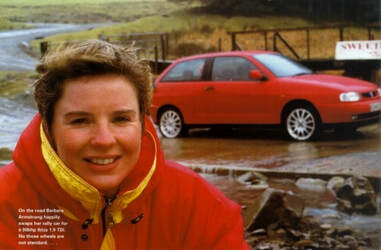 Barbara Armstrong: SEAT Ibiza 1.9 TDi
What do you drive if you are a rally driver? Easy, it must be the fastest thing the company has in its line up right? Not exactly. When Barbara Armstrong steps out of her six-speed 260bhp rally car it's into an Ibiza 1.9TDi. That choice surprised Seat Cupra Sport Rally Team Leader Gary Savage too, as Barbara recalls, "He said 'You can't have a diesel; you're a rally driver', I must admit it does seem a bit funny."

Perhaps it's a particularly powerful one? "I don't know details like that; I'm just a girl, I just drive the cars." Whether or not you believe that, Barbara knows what she wants and the TDi suits her fine. "Perhaps it's a bit slow now as it's only done about three thousand miles but once it gets up to around ten it'll be a bit of a flyer. It's got loads of torque; it's a nice engine and I'm getting over 400 miles out of a tank. That's excellent."

She's right. The TDi will get near enough 60 mpg in mixed driving, and over 70 on a long run. Why's that important to a rally driver? A lot of miles need to be covered in a season, "Just on the road alone I do between 25 and 30,000 to promotions and launches and so on. The longest trip is home to Scotland, to Castle Douglas, which is over 400 miles and that was perfectly fine. You can cruise quickly at only around 3000 revs, just tootling along. Then it's so quiet you don't ever know it's a diesel.

It certainly looks impressive for a diesel, with its smart 16in alloys and low profile 195/45s. "Oh, I've changed the wheels. It did have standard wheel trims on it but they flew off in Scotland when I went up and down a rally stage just marking it out. I put on these wheels and tyres which came off the cars we were using for our SEAT track days last year. Now I just need a wee roof spoiler...".
Powered by