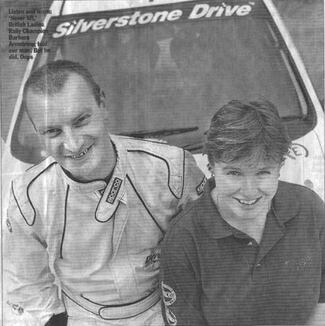 Novice rally driver Paul Hudson promised Peugeot he wouldn't crash its small but perfectly tweaked car on the Woodpecker Stages Rally......and how could he after tuition from Barbara! Here he writes of his experience...

"Valuable extra tuition of three two-hour sessions was supplied by Barbara Armstrong, twice British Ladies' Rally Champion, and works Peugeot and SEAT driver. Despite my desire to get as much experience as possible, this was a reasonable amount of time because I quickly found that you can only concentrate for so long before mistakes are made.

Silverstone's cars are equipped with road-going tyres, so you know that there's no way you'll get a load of grip, but Barbara helped me gain confidence to go faster and faster - and know what to do should the car get out of shape on fast sweepers. The week before my debut I attended the Forest Experience Rally School in Carno, Wales, run by British stars Mark and David Higgins. Here, I was able to come to terms with driving in a real forest, with real trees waiting to catch the unwary. However, then amount of grip from forest tyres takes some getting used to - after my experience at Silverstone I was waiting for the car to skid, but it seemed to grip harder the faster I went.

​​I had also visited the Peugeot Sport competition department to see the car I would be driving and make sure the seat was in the correct position. There I met Oli Boakes and Dennis Powers, the mechanics who would look after me - and the car. Many thanks must go to them for their support and advice, as well as Peugeot competition manager Mick Linford and to Stella Boyles, who organises the Peugeot Super 106 Cup."
Powered by